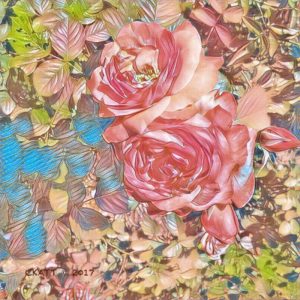 The Portrait of Duffy was a new challenge. Never had done a painted portrait with acrylic paints. That’s okay. Experiments, learning curves, and self doubt are all good for something. The portraits are based on photos that me or other people take of the subjects. Duffy’s body looks completely foreshortened. My friend Alan, who was also a painter, encouraged me throughout the process.

Duffy is a Newfoundland cross with a Cocker Spaniel, so I was told. He has the bigger foofy head with droopy eyes and a smaller body. Lots of fur to trim. His body is trimmed in this picture, which exaggerates the foreshortening. Also, I cut off the feet to emphasize his expression. I have never met him, but he has a striking expression.

This could be called the Blue Dog, maybe. I don’t know. I started with purple underlay and switched to the blue accents. That’s easily done with acrylic paint.

On to the next portrait of a German Shepherd Dog that will be a pastel. Soft chalks and pastel pencil have a more familiar feel. But I totally enjoyed doing this portrait.